Getting an education is not the same as becoming educated.

G'way, Kid, Yer Bother'n Me: The ECB says Greek bonds are no longer acceptable as collateral for loans. This will further cripple Greek banks and render Greek sovereigns reasonably useless in international finance.

Endgame: Romney (a) has something to hide and (b) knows - or thinks he knows- what he's doing. He may be doing a strip tease - all the while knowing the promised 'gotcha' isn't there, or he may just be waiting until he's the official candidate and the R's will have to grin and bear it. Or he may have taken advantage of the tax amnesty in 2009, which would make him ineligible to serve as president. Nah.

Wasted Days And Wasted Nights: The Spanish bailout – despite advance propaganda – is not a cure-all. It's not even a cure-some. It certainly is not as first advertised. It is another round of “give the banks money and hold the taxpayers responsible for repaying it.” To quote German Finance Minister Schauble, “There is no direct infusion into the Spanish banking system. The European partners have a memorandum of understanding with the state of Spain and money is delivered to the state of Spain and guaranteed by the state,” Not only is Spain getting crushed, so too are Ireland's hopes of renegotiation. When's the disaster arrive? Spain's Budget Minister explains the current situation: "“There’s no money in the public coffers. There is no money to pay for public services." He went on to explain that if the ECB had not intervened in the secondary market, "Spain would have collapsed." Not too soon, but suddenly.

Blue Pencil: As the Libor investigation spreads, some wonder if Wall Street might start eating its own. Start?

Before/After: Since the 19070's revivals in the housing market have lead the way to economic growth. That was then, this is now. Now the rest of the economy will have to pick up before workers will risk getting screwed by the bankers again plunging into home ownership. And the economy isn't picking up, and you probably shouldn't invest too much in the housing industry's recent claims about roses.

Tyrants Are Us: Russia and China, vetoing a UN Security Council effort to urge an end to Syria's violence, continue to support Assad in his quest to kill Syrian citizens.

Crème de la Crème: The distribution of wealth in the US is so lopsided that targeting "the top 2%", while sounding politically correct, doesn't mean what you think it means. The top 2% includes individuals earning more than $200,000 a year and married couples making more than $250,000 - which while a lot, does not put them in the millionaire/billionaire class. Even the top 1% are paupers beside the to 0.1%. Sam Walton's six heirs hold more wealth than the bottom 42% of Americans combined, making each one of them richer than more than 20,000,000 of their fellow citizens. Know your enemy.

Buy, Buy, American Pie: For three years the consensus has been that the US economy was entering a robust recovery. Must be a very small doorway. 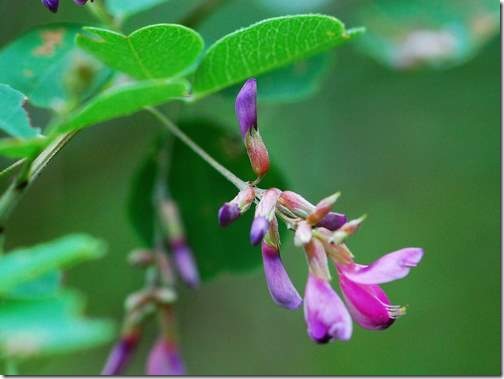 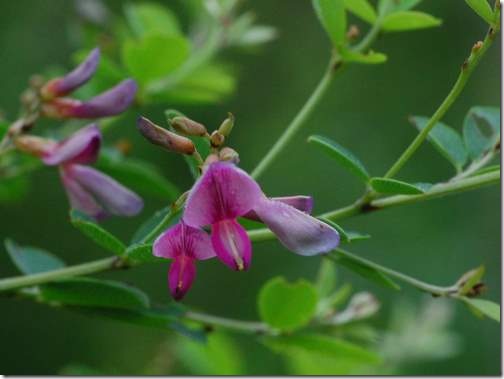 Usual prize to anyone who can identify this one.

Nope, Mammoth, but the flower sure looks like a member of the pea family. Plant is a bush - 6 to 8 feet tall and grows in clumps of stems - sort of like from a rhizome.

Found growing in the wetter portion of a high-line right of way that hasn't been cleared in about 10 years (other parts are full of blackberries!)

could be some kind of honeysuckle, but it'd be blooming at the wrong time of year...

The individual flowers are about 1/8 to 1/4 inch - tiny. Not, I think, related to honeysuckle, which is mostly a vine. This is either something very rare to this area, or common as a nursery landscape item and not a "wild" flower.

i wondered if it might be some sort of pepper or olive... but it doesn't seem to be.

Could it be a type of azalea? They require most soil. But the flowers look kind of small for an azalea bush.

Upon closer inspection, it looks like it could be a Cercis chinensis (Eastern Redbud). But I can't be sure. Although I feel like I am getting closer.

The color is in the Cercis range, but redbuds are springtime bloomers and these just started showing up about 10 days ago and the blooms are tiny and don't color the whole plant - the green leaves are much bigger and dominate. The pictures emphasize the buds beyond their actual prominence.

There has to be a really small number of bushes with an obcordate leaf (the only other thing visible in the picture). Is it possible that it is a tree? If so, black locust tree has similar flowers.

i have black locusts & hybrid pinks; all black locust trees have white blooms, & both have larger blooms than you described...

google images of a red locust tree & see if that's it...

common in Austin area, we call it Eve's Necklace.

Brendan Kenny again, it's a small tree. The reference to necklace doesn't refer to the flowers but to the string of black seeds the tree produces.

Catching up: The leaves are (despite the misleading angles in the photo) roundish when young, more ovate as they mature. The flowers do resemble the 'Eve's Necklace', but the leaves do not, as the unk's leaves come in a set of three, two opposite and a terminal one, not the longer compound leaf-set of Eve's Necklace.

rjs's ref to the black locust took me to Kentucky Red Locust tree/bush, but I'm not yet convinced. Maybe I'll have to wait and see what fruit develops.