Police violence isn't new, smartphone cameras are.
Teen Angels: The economy is being saved by teenagers – the latest BLS data show that adults (25 to 54 years) lost 455,000 jobs while the kids (24 and under) gained 691,000 low-paying semi-skilled jobs scooping ice cream and emptying bedpans. Transportation jobs, dependent on real economic activity moving real goods around, disappeared by the thousands. Unemployment, including the “marginally attached” but not counting those who can no longer get unemployment payments, is now at 9.9%. Nevertheless, the headline number -287,000 jobs! - prompted a knee-jerk surge in US Stocks.
Terms of Endearment, Not: “Global excess industrial production capacity...” Echoed by ”Global economy 'grim'...”
Money Quote: Around the world, the message being sent to the average citizen is “the lifestyle you ordered is out of stock”. The promises of rising consumption, steady employment, secure pensions and guaranteed healthcare can no longer be kept in a world of limited resources, stagnant growth, negative demographics and rising income/wealth inequality. The “good old days” of cheap, abundant energy and steady expansion of consumption, jobs, profits and taxes are over.
Unclear on the Concept: The EU plans to give Ukraine's corrupt leadership 50 million euros to fight corruption in the Ukraine.
By The Pricking Of My Thumbs: Upwards of $10 trillion in US and EU government debt now trades at negative yields. And not just short-term safety plays – the negative interest rates include lots of 10-year bonds and the Swiss are offering to hold onto your money for 50 years and then give most of it back. It is a strange world where those with big bucks are willing to let the government – even the very iffy Spanish - hold their money for 10 to 50 years with the promise of losing only a little bit of their money. It is not just that no one expects any inflation or economic growth for a long, long time, lots of folks are hedging against outright deflation. This is not a good development.
Performance Play: Since Bill left the White House in 2000, he and Hillary have received ('earned' just didn't seem like the right word) over $150 million in speaking fees.
The 500 Pound Robot: No one seems eager to discuss the moral implications of the Dallas police using a robot to execute a man trapped in a parking garage. Sure, it put an end to the standoff, but was it the best way? Was this officially sanctioned murder socially or morally acceptable? Will the next one be? Or the one after that where they blow up the wrong guy or kill a bunch of collaterals?
Clipped & Saved: Wikileaks notes that the FBI did not ask them for their copies of Hillary's emails. That's okay – they'' ll publish them pretty soon anyway. The FBI could have gone up to Ft Meade and read the NSA's copies...
Projecting And Serving: Baton Rouge police in riot/combat gear raided a BLM protest party at a private residence, forcing the people to disperse. And when they stepped into the street, the cops arrested them for being black in public blocking traffic.
Precision Weapons: The US will be deploying 560 soldiers to help the Iraqi army retake Mosul. Exactly 560, 559 wouldn't do the trick and 561 would be overkill.
Just Said “No!”: Japan has told our next president that it will not renegotiate any part of the TTP pact. Hillary says the US should get a 'redo' if they do not benefit American workers, and none of them do.
Porn O'Graph: Reality, check.
The Parting Shot: 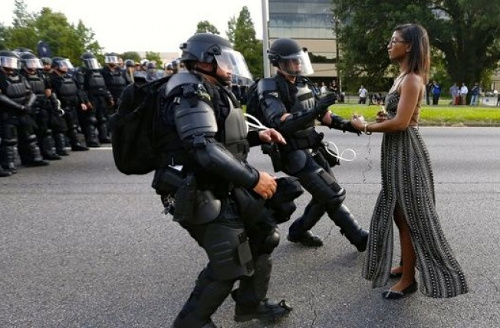 Posted by Charles Kingsley Michaelson, III at 7:10 AM

Let me fix that for you.

Since Bill left the White House in 2000, he and Hillary have extracted ('earned' just didn't seem like the right word) over $150 million in speaking fees.

One belabors the obvious when pointing to the destruction of our civilization proceeding 'as planned'.

The irony here is the old model stopped working but the 'beneficiaries' of the now defunct model will be damned if they're going to 'lose' [control] too!

The new model should be getting rolled into place but since the, er, 'owners' of the broken model don't know what that will be so we find ourselves stuck, waiting for a signal that will never come.

How sad is it that this is what revolts are made of?

re Dallas drone. Nothing particularly new here, just a new technology. Waco and Philly come to mind, and Fred Hampton, along with countless other instances fading back into the mist. They burnt J W Booth out of a barn, did they not?

It's well understood that cop killers have short shelf lives. Their arrests mark the apex intersection of police rage and institutional dominance doctrine. As such, the odds of being shot while resisting arrest or brandishing a weapon escalate drastically.

They blew the mother effer up. Totally predicable in hindsight. Man in blue high fives across the country.

In the end, this is exactly like shooting an unarmed man lying on the street, just more so. And more premeditated, but really on a continuum of traceable mindset and values. The neighbors are lucky they didn't cluster bomb the whole damn block.

So whats new and different is the tech used, and the fact that the world is watching more closely and in real time.

re parting shot. wow. super powerful. both horrifying and inspiring all at once. i assume it's yours? damn nice work.

No, McMike. The photo is by Reuters photographer Jonathan Bachman and I should have credited him.

There, done so. Thanks, McMike.

re photo. aha. and here I was picturing you right out there in the mix, wearing a leather football helmet and cotton bandana over your face to get that shot!

In any case, thanks for sharing it. Helluva image.

Sorry to disappoint, but the last demonstration I took part in that involved both the police and the Feds was against the House Unamerican Activities Committee, many decades ago.

I guess you've done your time then. More than I can say for myself.

Lucky for all of us, there's people like that young woman in the photo who are willing to fill the void.

Re "Teen Angels": The Household Survey actually indicates that 67,000 more people were working in June versus May. So the headline number of 287,000 consists of a minimum of 220,000 phantom jobs created by BLS "adjustment" magic. So of course, for a totally "rational" market, more good bullshit is a "buy" signal.